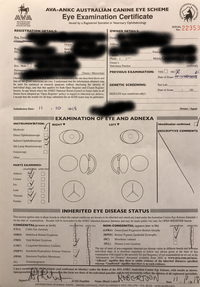 A Standard ACES Eye Report
​Finnish Lapphunds are a relatively healthy breed with few known health concerns. The average lifespan of a Lappie is around 12-15 years, although it is not uncommon to hear of Lappies reaching ages of 16-17 years!
Breeders across the globe perform a number of routine health checks on their Lappies prior to their inclusion into breeding programs and responsible, ethical breeders will do everything they can to make the most informed breeding decisions based on these results. We are constantly researching the latest health information from laboratories within Australia and around the world and collaborating with Lappie breeders worldwide to ensure we are not only breeding healthy dogs, but also limiting the incidence of genetic disorders for our future generations.
​
When looking for a puppy, potential owners should be able to ask their breeder to provide the following standard health information on the parents: 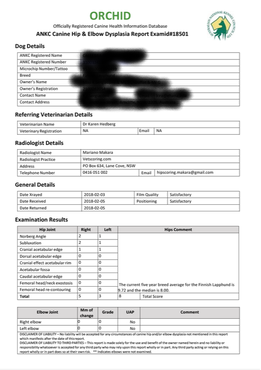 A standard Hip and Elbow Report
​Hip Dysplasia is poor formation of the hip joint which results in early degeneration, it appears in most breeds of dogs, larger breeds suffering more than small-medium sized breeds and can result in pain and discomfort from a very early age. As well as a genetic link, studies have proven that environmental factors can also play a large part in the development of hip dysplasia. Breeders caution puppy owners to take great care, especially during the first 12 months of their dogs life when it comes to running/jumping, walking on slippery surfaces, and racing up and down stairs. It’s advised to let your dog run under their own pace, rather than letting them undertake dog sports such as lure coursing (as an example) as a puppies growth plates do not finish closing until they are around 18 months old. Repetitive, early strain in this way can have an impact on the formation of the hip/elbow joints, which can lead to symptoms of dysplasia and arthritis, so it’s recommended to wait until the are fully mature before engaging in these types of exercises.
​
The basic aim of Hip and Elbow scoring is to effectively look for signs of degeneration, dysplasia and disease within the hip/elbow joint. Within Australia we have a scheme known as CHEDS ‘Canine Hip and Elbow Dysplasia Scheme’; Between the age of 12 months – 2 years old, an x-ray is taken (usually under general anesthetic), looking for any abnormal signs around the hip and elbow joints. These x-rays are sent off to a specialist reader who is looking for a snug fit between the ball and socket of the hip joint, amongst other things, and will provide an overall score.
Breeders are provided a copy of the ‘score’ for the x-rays, which lists the marks given in each area of the hip/elbow joints. Within Australia, they are generally written as double figures, signifying ‘left’ and ‘right’ for hips and the same for elbows (2/5 for example but sometimes these numbers can be joined together and written as a total of 7) dogs scored overseas can be written as a single letter.
​
The best results you can get are 0/0 or A, and the worst results are 53/53 or E. The current breed average is 10.41 taken from the most recent data available on the ORCHID website for 2019.

While prcd-PRA is the main eye concern (information below), there are a few rarer diseases that can affect the eyes of a dog. These issues are not just isolated to Finnish Lapphunds, but appear in a lot of other breeds of dog as well.
In Australia there is a national scheme known as ACES (Australian Canine Eye Scheme) which is endorsed by the Australian Veterinary Association (AVA) and also the Australian National Kennel Council (ANKC). Breeders are advised to have their dogs eyes checked every 18months-2 years by a qualified, registered ACES eye specialist.

The aim of the scheme is to try to minimise the chances of passing on painful or vision-threatening eye conditions from one generation to the next, through regular screening. It also provides a way for breeders to have whole litters checked by a qualified eye specialist before sending them to their forever homes. Within Australia, the Finnish Lapphund breed has a good reputation for doing all the right things when it comes to ACES eye exams.

When attending an ACES exam, the diseases the ophthalmologist is looking for signs of include:

In basic terms PRA is a non painful, inherited disease that causes blindness in dogs. Progressive rod-cone degeneration (or prcd) is the most common form of PRA found to occur in Finnish Lapphunds and many other breeds of dog. It is a late onset type of PRA with clinical signs generally appearing around 5-8 years old, beginning with loss of night vision and gradually a complete loss of day vision. It's important to explain that we can only genetically screen for this one particular type of PRA, while others have rarely occurred in the breed, the form of inheritance is not yet understood.

Lucky for breeders, prcd-PRA has a recessive inheritance meaning there is a simple way to avoid this disease through genetic testing! Recessive inheritance means that a dog will inherit one gene from each of its parents, either a 'Normal' or an 'Abnormal' one, with a dog requiring TWO abnormal genes in order to inherit this disease .There are 3 possible outcomes for any Lappie tested:
Registered breeders within Australia will only perform two types of matings, Clear x Clear (all resulting puppies will be Cleared by Parentage) or a Clear x Carrier (50% of the resulting puppies will be Clear and 50% Carriers with individual statuses confirmed via DNA test ). There should never be an affected prcd-PRA pup born from registered breeders who screen for prcd-PRA.

For the average pet person, whether you have a puppy who is a carrier or clear will make absolutely no difference, this information is only important to breeders for making future decisions on matings.

Glycogen Storage Disease II (GSDII), or the Pompe disease, has been reported in humans and different animal species, such as Japanese quails, cats, sheep and dogs. Canine glycogen storage disease is known to affect Lapponian dog breeds, such as the Finnish and Swedish Lapphunds and the Lapponian Herder.
​
Pompe disease is an inherited disorder caused by the buildup of a complex sugar called glycogen in the body's cells. The accumulation of glycogen in certain organs and tissues, especially muscles, impairs their ability to function normally.
First clinical signs in affected dogs are observable at around 6 months of age. The symptoms include poor growth, vomiting, progressive muscular weakness, condition loss, heart disease, and myocardial hypertrophy. Due to severity of symptoms, death occurs before 2 years of age in affected dogs, or euthanasia is required.

Just like prcd-PRA above, GSDII has a recessive inheritance, so through genetic testing and screening of dogs, we can easily avoid this disease.
Page under construction, check back soon 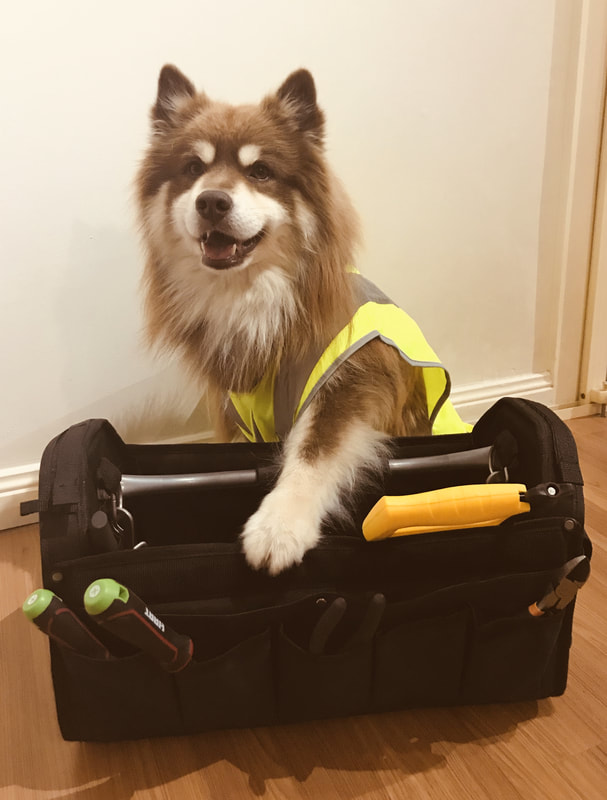